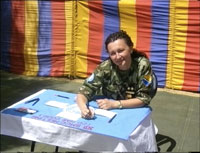 Colonel Mersida Mešetović is a woman with interesting military career and successful family life. She grew up in a family with two sisters, and had no male role-model that would perhaps have an influence on choosing such a career. She became a Sector Commander in UN Peacekeeping Mission…

She was attracted to military because of, as the Colonel says, the first association when this profession is mentioned – order, work and discipline.

“Good organization is what attracted me to military”, the Colonel says. “Although I lived in a female surrounding (father was away all the time), it was the order that dominated in my family that I liked in professional sense as well”.

By the time the Colonel was supposed to start her studies, an option of military academy was not open for women, so she instead chose the Faculty of Political Sciences, People’s  Defense.

These studies were formed throughout Yugoslavia, in all capitals of the republics, and for the first time, women got the opportunity not only to get education in defense area, but also to serve several months in the army as a part of practice, in “Marshal Tito” barracks in Sarajevo. After completing the studies, the Colonel acquired, by degree, her first commission in JNA (Yugoslav People’s Army), a rank of reserve 2nd lieutenant. Today, she is one of the most successful women in the Armed Forces of BiH.

“In my family, nobody has any special affinity towards the uniform”, says Colonel Mersida. “They are simply indifferent. My husband also served army during the war, but he was happy to demobilize and retire from army as soon as he could”.

When she was younger, the need to prove herself as a woman in uniform was considerably bigger. Today she believes that women in the army are not viewed with skepticism, and that such an approach was provoked by the development of events itself. During the war, there was no difference between male and female soldiers, it was not important if you are a man or a woman, only support mattered, logistical or any other. After the war, female soldiers are viewed somewhat antagonistic, although this is the time of progress.

“Women are frustrated because they think they proved themselves in this profession long time ago, so why are we not treated equally?… But this is the case in other professions as well, in Health Care for example…”, adds the Colonel.

Despite all the challenges and obstacles of this profession, the Colonel did not lack support, and she continued to follow her dream. She acquired her first commission in 1987, the rank of lieutenant – colonel. At that time she met a lot of female military personnel that are successful in their jobs today (the Colonel gives an example of her colleague who is the Minister of Defense of Slovenia).

“If somebody asked me if I would change anything in my career, or if I would be ready to do it all over again, I would answer yes…”, proudly says Colonel Mešetović.

The peak of her career was participation in UN Peacekeeping Mission Ethiopia – Eritrea. As she says, it was a special period of her life. Although she originally signed up for the mission in Congo, the UN invitation insisted that they wanted a woman in this mission, and because her qualifications were the best, she was transferred to the mission in Ethiopia.

She departed for the mission by herself at the end of 2005. There were two female military observers from Tanzania and America, already. Colonel Mersida conducted her mission in the central sector. Military observers were divided into teams from eight to ten people, none of which could have two people from the same country.

“First thing I remember from the mission is the culture shock I experienced. Nobody can prepare you for that”, says Colonel. “Hunger and poverty that were there, conditions of life that are unimaginable for our standards got me into the situation where I did not talk to anybody for the first three days!”.

Only after some time she begun to adapt slowly. Her colleagues accepted her very well, but as the Colonel points out, she was expected to do no less than male soldiers.

After three months in the mission, time came for a team leader to change. The previous one was from Croatia, and he recommended our Colonel as a leader, a woman for the first time.

“The job of the team leader is extremely hard, because you are not a commander, but just a leader, you have no authority to give orders, you just have to make such a working atmosphere that will guarantee obedience of your subordinates, on volunteer basis solely”, says Colonel Mešetović. In order to get this position, the Colonel had to undergo many tests and interviews in front of the commission, and give good answers to the key questions about improving the community she works in. The Commission members were delighted with her positive attitude and excellent work results, so she got the deserved position of the team leader. She served on that position for four months, when she was nominated for a higher position of the chief of central sector.

“My relationship with the local population and local armed forces in my area of responsibility was crucial for me getting selected for the chief of sector. This relationship with civilians is a great advantage for military observers, because it enables them the freedom of movement and information,” explains the Colonel. Thanks to such an attitude, you can get a large number of information for a short period of time, and that is very beneficial for the members of the mission.

What Colonel Mešetović did is, in a way, a revolutionary approach of military personnel to peacekeeping missions. She opened the doors of her sector to all local population, and thereby tried to find a compromise and cooperation. She also invited religious leaders (because the local population was extremely religiously oriented, and cooperation with religious communities was truly helpful), she even raised symbolic amounts of money for churches, hospitals, orphanages… With the rest of the observers she was helping the organization Sisters of Mothers Theresa in their work with abandoned children, children with AIDS, pulmonary patients, children with mental diseases, trying to ease their troubles with symbolic gifts.

“That way, you open the doors to yourself, and job gets done more easily”, adds Mersida Mešetović. She is also especially happy because she was offered a position in command in Asmara, but she refused it because she wanted to work with local population and be with people.

Military observers from 38 countries took part in the mission. Among the colleagues there was a climate of mutual appreciation, respect, collegiality. It was not easy to impose herself as a team leader, but the fact that she “broke the ice” enabled other women soldiers to apply after her for the positions of team leaders and other decision making positions. “When people recognize you as hardworking, then it is not a problem when  you are a female soldier”, says the Colonel.

The mission ended in 2008, and the Colonel left it two years before that. What she learned from her colleagues who continued to work in the mission is that even after a year everybody gladly remembered her down there.

“There is no bigger compliment than that”, says the Colonel. “What I was aware for the whole time of the mission was that neither I, nor any other member of the mission could greatly help the people, but what can be done was to appreciate the people as they are, and thereby guarantee nice time spent in the mission for both sides”. She also established very good cooperation with the African Union in solving the problems of African population.

It was very hard to leave the mission after 14 months spent in Ethiopia. After that she spent eight months in the USA, but the Colonel decisively says that, if she had to choose between these two periods, she would chose working in Ethiopia.

“Down there you learn a lot of things, how to use fruit and vegetables and how to find food, how to save on water, how to walk in boots all the time to protect yourself from scorpions and snakes, how to carry out hygienic needs in minimal conditions, etc… You learn not to be profligate, you bring back the fortune of multicultural conversations, and other priceless and noble experiences… You come back as a better person!”. Because today there is very little news on further development of the events in Ethiopia and Eritrea, she sincerely hopes that the situation changed to better.

Today Colonel Mersida Mešetović works in the Ministry of Defense of BiH, and her colleagues highly respect her. She is a qualified employee, she successfully graduated from the NATO Defense College in Rome at the Senior Course for NATO officers.

In the Colonel Mešetović`s work report it is highlighted, among other things, that she is “very well qualified for working in positions in international and NATO surrounding”. This is considered to be a quality that is recommended for possible duty assignments in NATO Headquarters in the countries in the Partnership for Peace program or NATO members. During the education at the above mentioned college, Colonel Mešetović opened the doors to other members of the Armed Forces of BiH to get education in such an important institution.