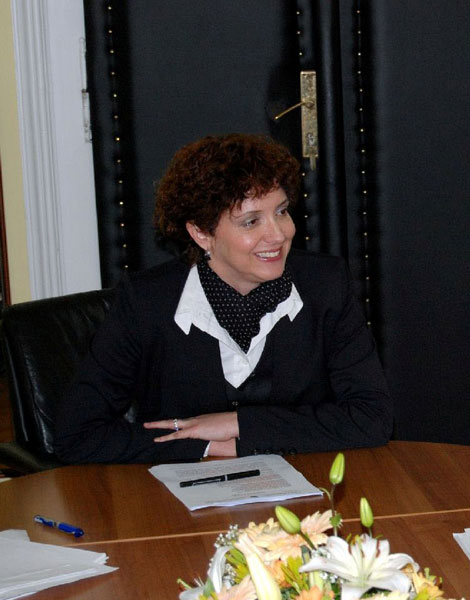 Interview with Ana Trišić-Babić, the president of the NATO Coordination Team

Although no political agreement has been reached on registering military property as BiH state property, president of the NATO Coordination Team within the Council of Ministers of Bosnia and Herzegovina, Ana Trišić – Babić, submitted to NATO representatives early this month the draft of the first Annual National Plan (ANP) of Bosnia and Herzegovina, which represents the first step every country takes starting its Membership Action Plan (MAP) required for membership in the North-Atlantic Alliance.

You submitted the draft of the first national plan to the NATO Headquarters Sarajevo Commander, the Chargé d’Affaires in American Embassy, and the Norwegian ambassador, since this is the contact embassy between our country and NATO. What have their responses been so far?

–  Do you believe that the agreement on registration of perspective military property will be reached soon?

This process has been approached wrongly since the very beginning. The process has been individualized, instead of being channeled through responsible institutions in BiH. The responsibility for all issues related to military property lies on the Council of Ministers of Bosnia and Herzegovina, entity governments, and the BiH Parliament, in no case individuals. The condition from Tallinn should not be presented as a political problem, but should be solved within administrative-legal frameworks. It is possible to reach the agreement, and I hope this will happen after elections in October.

– What are NATO Coordination Team’s next activities? What will be its priority until the end of 2010?

The whole situation related to the MAP conditions is not stimulating for the NATO Coordination Team (NCT), because the Team is not responsible for solving the issues of military property. On the other hand, the NCT cannot “jump over” the hurdle which comes in form of military property. After Tallinn, it was not likely that the conditions would be met by the end of September, when the first MAP cycle was to begin. Beside these founded doubts, the whole NCT got involved in creation of the first ANP, and this first draft was produced in a very short period of time. Our enthusiasm, keeping in mind the new situation, i.e. continuation of application of the Individual Partnership Action Plan (IPAP), has not weakened. On the contrary, in the following period the NCT will be focused on implementing the IPAP, which is, to a large extent, in line with the ANP. The goal is continuation of reforms BiH needs. We should all be aware of the fact that we need to implement them for our own sakes, not only in order to get admitted to NATO. We must not stop or be discouraged now, because, if the issue of military property gets solved after elections, we should be ready to “hop on the train” called the ANP.

–  Can you evaluate the NCT’s work since the Ministry of Foreign Affairs of Bosnia and Herzegovina, headed by you, took over the leading role in the process of Bosnia’s integration in NATO? You have mentioned the “devaluating of NCT’s work” by some media?

BiH and NATO’s relations have reached a level which, at certain point, required political strengthening too. It needed to be placed under auspices of the Ministry of Foreign Affairs of Bosnia and Herzegovina. The military aspect of this cooperation has been developed so well that some things are being done almost routinely. For a country as small as Bosnia and Herzegovina this is a tremendous progress. The NCT gathers representatives of all relevant institutions in Bosnia and Herzegovina, and I am very satisfied with professional relations within the Team, and its members’ dedication to our obligations and tasks. It is inconvenient to evaluate results of your own work, so I am leaving that to those following our work. This also includes media, with which I have good and fair cooperation. Of course, there is always room for improvement. Some plans in this direction already exist, and you will be informed when we start undertaking concrete activities. I appreciate the critiques provided by media, but I cannot accept that some media are looking for culprits for the delay in the first MAP cycle and are pointing fingers. Such approach is not constructive. On the contrary, it is destructive and it threatens to jeopardize what the NCT has worked hard on. I stand behind our results, especially since they are contributing to Bosnia achieving its foreign policy priority, which is the Alliance membership.

New head of the Mission to NATO

–  Ambassador Nikola Radmanovic’s mandate as the head of the BiH Mission to NATO has expired. Keeping in mind the importance of the role assumed by this post, do you know who his successor will be and when he/she is to enter the office?

BiH Presidency appoints BiH ambassadors. There is a candidate for this prestigious post, but, in line with common diplomatic practice, the name of the candidate is not to be disclosed before the host country, in this case the Kingdom of Belgium, and all permanent members of NATO approve the candidate. It should also be noted that the candidate should receive security clearance in Bosnia and Herzegovina in order to be allowed to work at the BiH Mission to NATO in Brussels. This is a part of full implementation of the Security of Information Agreement between Bosnia and Herzegovina and NATO, which, among other, pertains to all employed in the BiH Mission.