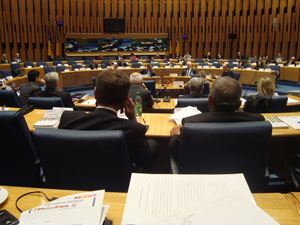 Ministers of Internal Affairs of the Broader Region Talked in Sarajevo

Bosnia and Herzegovina and its capital Sarajevo hosted an international conference “Intercultural dialogue and internal security”, held late April. Ministers of internal affairs of the West Balkans countries and Salzburg Forum took part at the conference. After an intense two-day session, the Sarajevo Declaration was adopted, according to which cultural diversity and dialogue are accepted as a source of richness and multicultural dialogue as an instrument of fight against terrorism.

Conclusions from the conference were summed up in the Sarajevo Declaration on intercultural dialogue and internal security, which was supported and adopted by all participants. Here are some of the basic principles of the Declaration:

The first day of the conference started with the visit to four main houses of worship in Sarajevo (Cathedral of Heart of Jesus, Synagogue, Old Orthodox Church of Archangels Michael and Gabriel and Gazi Husrev-bey’s mosque), the talk with religious leaders, and it ended with an official opening ceremony at the BiH National Museum. The opening ceremony was led by the BiH Minister of Security Sadik Ahmetović, who warmly greeted the representatives of the Salzburg Forum (Austria, Slovenia, Czech Republic, Poland, Slovakia, Hungary, Bulgaria, Romania) and Friends of Salzburg Forum (Albania, Bosnia and Herzegovina, Montenegro, Macedonia, Serbia) and Croatia as an associated member of the Salzburg Forum. The reception ended with an intercultural party, where cultural and gastronomic attractions of each mentioned country were presented.

The next day, Nikola Špirić, Chair of the BiH Council of Ministers, opened the Conference in the hall of the BiH Parliamentary Assembly. Introductory speeches were held by the High Representative and European Union Special Representative Valentin Inzko and Austrian Minister of Internal Affairs Maria Fekter, whose ministry is a co-organizer of the Conference, together with the BiH Ministry of Security. High-ranking religious officials, representatives of academic community, media, diplomatic corp and international organizations attended the conference.

The Conference was focused on improvement of internal and regional security and was held in four panels.

The first panel discussed common European values and intercultural dialogue in everyday life. The Chair of the panel, Minister of Internal Affairs of the Republic of Serbia Ivica Dačić, said that the ways of channeling the dialogue which would include not only elites, but also the citizens of all the countries in the region, should be considered. The idea of respecting differences and of developing dialogue between peoples represents a joint value of all the countries in Europe. Slovenian Minister of Internal Affairs, Katarina Kresal, pointed out the importance of developing the intercultural dialogue as an instrument of understanding other cultures as well as self-criticism of its own. The European Union identity is based on shared values, such as multiculturalism, tolerance, rule of law, respect of human rights, etc, and all of them are connected by dialogue itself. 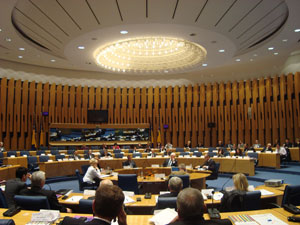 During the panel discussion, the following questions were debated: what the most important aspects of implementation of intercultural dialogue are; what is the most important for intercultural dialogue; personal experiences of participating countries and the importance of equality of citizens as a condition for intercultural dialogue. Panelists included General Manager of Asko Nabytek/Nabutok group Huseyin Ozcelik, professor at the Franciscan Theology Faculty in Sarajevo Mile Babić, professor at the Marlin Barleti University in Tirana Erion Kristo, and Executive Director of the German Community in Osijek Renata Trischler.

The second panel addressed the intercultural dialogue from the perspective of security policies, and was chaired by the Romanian Minister of Administration and Internal Affairs Vasile Blaga and Macedonian Deputy Minister of Internal Affairs Djevat Buchi. The roles of law enforcement, information sharing within the private sector and civil society, education in prevention of crime, and strengthening security politics were emphasized.

During the discussion, questions related to the importance of intercultural dialogue for the ministries of internal affairs, strategic concepts of security, and whether there is a connection between a functional intercultural dialogue and the crime rate, were all raised. Panelists included EU General Director of Directorate for Justice and Internal Affairs Ivan Biziak, professor at the Faculty of Philosophy in Banja Luka Miodrag Živanović, Deputy Minister, General Director for NATO and Defense at Serbian at Ministry of Foreign Affairs of Serbia Zoran Vujić, and Head of International Relations, EU Coordination and Public Relations in the Austrian Ministry of Internal Affairs Wilhelm Sandrisser.

The third panel dealt with the intercultural dialogue as an instrument against radicalization and recruiting. It was chaired by the Deputy Minister of Internal Affairs of Albania Avenir Peka and the Ambassador of the Republic of Croatia in BiH Tonči Staničić. It was said that it was important to send recommendations from Bosnia and Herzegovina, which has been multicultural by a definition since it existed, although it is often forgotten. The problem of radicalization and recruiting needs to be approached from the aspect of creation of political, social, cultural and economic conditions so such occurrences are prevented. As for the West Balkans countries, the economic factor is especially important.

The questions for the discussion were based on the ways in which the intercultural dialogue needs to be designed as a useful tool against radicalization and recruiting, what the International Community can do in the region, and how the crisis of identity can represent the source of radical violence. Panelists included professor at the Faculty of Criminal Sciences in Sarajevo Mirsad Abazović, the Head of the Office for EU Integrations and Negotiations in Macedonia Svetlana Vlahović, the Head of OSCE Mission in BiH Gary Robbins, and the Coordinator for International Police Coordination in the Austrian Federal Ministry of Internal Affairs, Kurt Hager.

The last panel discussed the role of religion as a bridge builder in the intercultural dialogue. It was chaired by the Minister of Internal Affairs of Montenegro Ivan Brajović and the Ambassador of Republic of Bulgaria in BiH Andrey Transki. The General Secretary of Interreligious Council of BiH Emir Kovačević held a presentation on the Interreligious Council of BiH and positive examples of intercultural cooperation and religion in our country.

The questions were related to personal experiences of the panelists, and religion was mentioned as a mediator and an instrument of reconciliation between peoples, with Archbishop of Vrhbosna Cardinal Vinko Puljić and Mufti of Sarajevo Husein ef. Smajkić addressing the audience. Panelists were former Minister of Internal Affairs of Montenegro Jusuf Kalamperović, General Director of Alevi Federation in Austria Deniz Karabulut, representative of Jewish Community in BiH Darko Finci and Director of think-tank Populari in BiH Alida Vračić.

Impression of the Organizers

The Head of Division for International Cooperation of the BiH Ministry of Security Ankica Tomić:

“I consider the conference successful. This is the first activity in the project entitled “Intercultural Dialogue and Internal Security” which was accepted by the ministers of the West Balkans countries together with the ministers of internal affairs, members of the Salzburg Forum at the Conference on Security in the West Balkans held in July 2008 in Vienna, in the year of intercultural dialogue in the European Union. BiH and Austria were selected as coordinators of the above mentioned project.

It may seem that intercultural dialogue and security – internal, that is regional security, are not closely related, but without the help from religious and academic communities, non-government organizations, without the bridge-building between peoples and religions, between all peoples, without mutual understanding, knowing and accepting the differences, there is no stable, secure surrounding. That is why intercultural dialogue is an efficient tool in our hands. It can help us in struggle against all types of radicalization and violation of personal and other types of security. An intercultural dialogue is needed to improve the internal and regional security. It represents a proactive and preventive activity of all segments of society aimed at defeating contemporary threats and challenges.

The next activity will be the Workshop on Cooperation and Coordination in Fight against Terrorism of the countries of the Southeastern Europe, which is planned to be held in Sarajevo, in the second half of October this year. The goal is to create an activity plan that will include best practices from the region and the EU in fight against all types of radicalization and recruitment for terrorist activities. This program is conceptually and essentially related to the European Strategy on Internal Security which provides a new frame for full integration of all EU citizens, as well as for fight against discrimination. It is a new security model that is aimed at neutralization of all sources of insecurity.