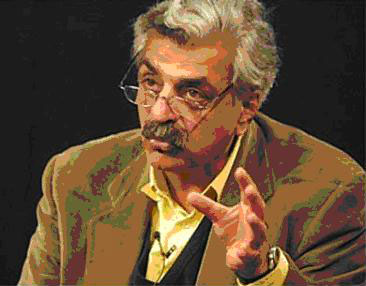 One of the most famous intellectuals of left circle in Great Britain, Tariq Ali, had a lecture on the Faculty of Political Sciences in Sarajevo late last month. This famous Pakistani-British author and activist criticized consistency of US foreign policy to Middle East, talked about Palestinian-Israeli relations, problems of intervention of Western allies in Afghanistan and Iraq, influence of Iran, rise of China, European political scene, and integration and mutual relations of Europe and Muslims.

There are many people who disagree with his analysis, but dialogue and capability to listen deferent opinions in order to avoid armed conflicts are among the very North-Atlantic values that our Atlantic Initiative shares. So we find his views very important for that dialogue.

Starting the lecture, designed as an attempt of a general observation of key moments of current political scene of the world, Ali looked back on the results of US President Barack Obama, generally rating them as insufficient and inadequate. Beyond expectations and hopes of a large part of world public, the coming of the new US leader, in this analyst’s opinion, did not result in a core change of direction and way of American actions on the world scene.

“It should be honestly and precisely said that what we see now is not any kind of change , but continuity of American foreign policy. Therefore, the steps that Obama has taken and decisions that he has made are not quintessentially different from the previous standing points of George Bush”, says Ali. The recently announced withdrawal of American troops from Iraq is no news, let alone a turn in US relation to this country. The withdrawal itself in due time was announced by Bush himself in his time. What is clear at the moment, although media is not paying much attention to it, is construction of six big American military bases, that remind of small American towns with their grandiosity and infrastructure. The only withdrawal that can be expected in reality is transfer of American troops from big cities to those dedicatedly built military – technical facilities. “Similar tactics have been employed in the 40s and 50s in the past century by previous occupiers of this country – the British”, warns Ali.

According to Ali’s insights, in Afghanistan, “another country whose territory has been occupied by American forces supported by significantly smaller number of troops of its allies”, in just one year of his mandate Obama issued more air attack orders then Bush did in five years. To make the matter even more visible, the new American President brought a decision on sending additional 30,000 soldiers to war operations in this country. He did it in spite of the opinions of some officials, especially  Karl W. Eikenberry, ambassador of USA in Afghanistan, about needlessness and hurtfulness of such decision.

Permanent insisting on exclusively military defeat of Afghani Taliban only leads to deepening of the conflict and strengthening of extremist tendencies, and in no case toward the finalization of American engagement. “The Taliban can not be beaten exclusively by military methods”, Ali is categorical. Such American positioning leads to fruitless situation in country which, among other things, is reflected in ineffective, puppet government of Hamid Karzai, which is operationally incapacitated in generating any long term sustainable positive changes. In such a situation there is a field left in which drug crime is blooming unobstructed, aided by widely spread corruption and nepotism on the highest levels.

On the other side, the constant rigid military presence leads to resignation between moderate layers of Afghan society. Currently, over 60% Afghanis oppose the US military presence in their country, which is a drastic increase compared to the beginning of interventions.

Also, one of the biggest problems is covering up the crimes committed by American soldiers against civilians, “about which the local, American, and the world public are equally and on purpose being misinformed”.

It is important to highlight that in a way ignorance of American public about the real nature of happenings in Afghanistan and Iraq negatively affects the overall development of events. “By not having the historical experience of being under occupation, Americans simply do not understand what really goes on in those countries. They can not understand that people, under no circumstances, like to be in that condition”, explains Ali. The consequence of that is a significant dose of general passivity of American citizens, he thinks.

The only way out of this situation is a definite retreat of Americans, because the chances for military victory are simply, in Ali’s opinion, impossible, and every insisting on that is illusionary.

All Quiet on the Middle East

Another continuity of American politics is reflected in their approach to resolution of Palestinian-Israeli question. All American presidents from Bush senior, over Bill Clinton, Bush junior, to Obama, had more or less the same approach that was based on declarative condemnation of building of Jewish settlements. However, this position was never followed by concrete penalty or restrictive measures towards Israel. For this relation of the current Israeli regime towards Palestinians that is reflected through obvious discrimination, deprivation of elementary freedoms and human rights, Ali said it looked like apartheid. Taking into consideration all the complexity of the situation, the fact of urgency and necessity of this question is inevitable. Ali considers the most advocated approach to the solution of creating two separate states as wrong. The territorial fragmentation and dispersion of population of Palestinians challenge sustainability of a possible independent Palestinian state. The only solution that would be sustainable on the long term is creation of one state that will under the same conditions and with equal right treat its citizens – Jews, Muslims and Christians.

One of the key players in this part of the world is Iran. Ali underlines that occupation of Iraq by Americans was truly possible only with the silent approval of Iran. The disinclination of the Irani regime to the rule of Saddam Hussein and inclination to Shi`a community are significant factors that were decisive to the today’s political situation in Iraq. This hidden, but planned influence resulted in division of Muslims in the war-torn country, above all, by political strengthening of the Shi`a community. Exactly because of that, Americans are now against any military adventure in Iran, says Ali. The reason for that is a real possibility of starting the war on three fronts; Iran itself, Iraq, where Iran has a huge influence, and possibly Lebanon, the country that borders Israel, because of very visible Shi`a influence. In American opposing to the Iranian nuclear program, Ali sees a clear manifestation  of imperial politics of double standards. On one side, Israel is permitted to posses nuclear weapons, while Iran is strictly forbidden to have something like that, although its neighbours, Pakistan and India, as well as American submarines in immediate vicinity have nuclear weapons.

Although the USA is facing failure in Afghanistan and Iraq, as well as financial crisis, according to Ali, that does not mean the end of the American empire. “It is too early to talk about that, although I would like it”, states this analyst.

Further in his lecture, Ali talked about the rise of China. Emphasizing this example as one of the most fascinating instances on the whole picture of new world, he especially commented on the significance of keeping political control as a vital factor of success. The fact that communist leadership did not fall apart, like the Soviet one, contributed to the huge economic strengthening. “Although the West does not see that or overlooks it, China carefully watches the movements in the world”, says Ali. Regarding this, it will be especially interesting to see the response of this emerging world power on the building of bases in Afghanistan just next to its border.

In the final part of his lecture, Ali analysed the general picture of politics in Europe. Pointing out that the ideological barrier among the parties is increasingly being removed, he gave an example of the forthcoming elections in Great Britain, where pre-electoral campaigns are increasingly influenced by celebrity culture, instead of questions and factors of vital importance.

However, one of the most acute problems Europe faces today is the rise of islamophobia. Ali talked about current headlines in newspapers that, pointing out the differences of the Muslims in comparison to other Europeans in the way they dress, eat or pray, increasingly resemble the propaganda that was employed against Jews.

Recalling on the continuing presence of Islamic civilization and Muslims in Europe from Iberian peninsula, Sicily, or Ottoman influence that greatly contributed to cultural enrichment of this continent, Ali highlighted the fact that European society currently consists of a large number of Muslims, and especially underlined the need for not only the change of relations, but a system protection of this minority as well.

“Europe can not ignore the existence or delete Muslims from their historical experience and current social practice, but it must find a way of their complete integration, and learn to live with 16 – 20 millions of them”, said Ali.

The lecture of this world renowned and engaged intellectual was moderated by Dr. Nerzuk Ćurak, professor on the Faculty of Political Sciences.

On the same evening, in the half-empty Bosniak Institute, publishing house Buybook organized a central promotion of Bosnian translation of five novels named Islam Quintet, in which this author, supported by the historical facts of presence of Islam in Europe, deals with relationship between Muslims and Christians and intertwining experiences of these two civilizations.