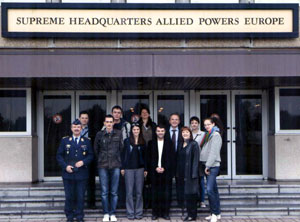 Members of Atlantic Initiative along with representatives of media and other NGOs from Bosnia and Herzegovina had a two-day visit to Brussels, where they attended several lectures at NATO headquarters and Supreme Headquarters Allied Powers Europe (SHAPE).

The briefings were extremely interesting and they concerned various topics from NATO history, development of the Alliance and current operations, with the focus on ISAF peace mission in Afghanistan, where soldiers of Armed forces of B&H are also engaged. There was also a focus on NATO’s relations with Russia, EU and the Balkans, especially Bosnia and Herzegovina, but the most important topic was the new strategic concept.

BiH’s Road to the Membership

Bosnia and Herzegovina’s road to Membership Action Plan was not easy, and it is still conditioned (mainly from the American side) with the solution of states army property issue. Diplomatic sources from NATO claim that the most important thing is for the authorities in B&H to show the will by achieving consensus on the matter of 69 prosperous army properties. Priorities must be highly specified and accomplished, and then presented to the authorities in Brussels in order to demonstrate united will on the road to membership. NATO’s officials think that the process of integration and stabilization of B&H means integration and stabilization of the whole region.

In conversation with Nikola Radovanović, head of mission of B&H to NATO, we discover that the position of B&H in NATO house is inevitable, and that the daily efforts of some political elites in sabotaging that process is not acknowledged.-“NATO is too serious matter for daily politics”-sais Radovanović, but adds that public relations and nongovernmental sector are very important factors of support for Euro- Atlantic integrations.

Concerning NATO’s involvement in the Balkans, their forces are still present on Kosovo ground, but mission Althea in Bosnia and Herzegovina is in the jurisdiction of European Union. NATO officials emphasized that the number of foreign army forces in our country is decreasing and that this is yet another proof of stabilization and progress.

These days NATO is occupied with forming a new strategic concept, which will be determined in Lisbon, on September/November this year. Current NATO strategy is based on the concept that was concluded back in 1990, but for today’s security challenges, as we are told by the diplomatic sources from the Headquarters, it is obviously out of date. New focus of the strategy will be based on the modern security threats (that were suddenly changed after 9.11. 2001), and the most important are international terrorism, cyber defense, proliferation and climate change.

Along these four groups, new security challenges are just popping up on a daily bases. NATO officials claim that the lack of strategy presented a big problem during Alliance history, and that ad hoc responses to security issues are no longer acceptable. New security threats are not so black and white, like in times of the Cold war. Yet another novelty, in relations to the Cold war period, is the fact that NATO’s enemy is no longer a state, but it can be only a group of people, or just an individual (like in the case of cyber criminal)!

NATO partners are expanded from the Euro- Atlantic region onto other continents (current partner countries are Australia, Japan, New Zealand, Columbia, Pakistan and South Korea).  NATO will also insist on developing a strategy for prevention of crisis and conflicts, which would have much larger benefit results than repressive functioning, everything in order to maintain the modernization process.