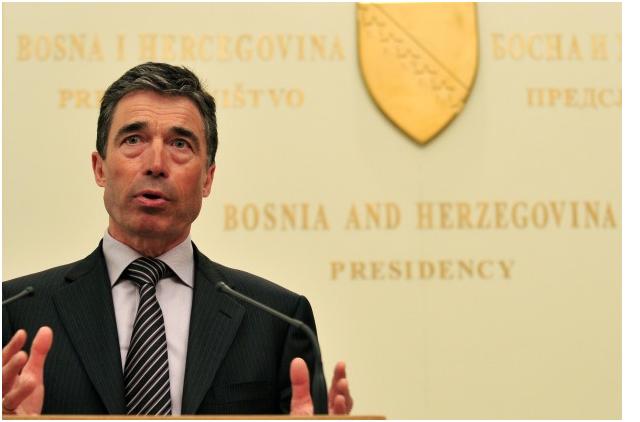 Bugojno Car-Bombing as seen from the Eyes of an American

This year, Bosnia and Herzegovina commemorates the genocide of the Bosniak population of Srebrenica that happened 15 years ago. Very recently, the country suffered a huge security blow that did not pass unnoticed in the international public. On 27 June 2010 a bomb was allegedly detonated by a man named Haris Čausević at the police station in Bugojno,  killing one police officer and injuring six more people in the station. This article shows a sentiment of an American student towards the issue of anti-terrorism fight in our country. Peter J. Gorman attends educational visit to BiH, which is organized by the Atlantic Initiative.

The Bugojno attack is not particularly noted for its scale, as there have been more severe attacks in Europe, but it carried some significance for some unnamed Western intelligence agencies that have been watching radical Islamist activity in BiH since the War started.

This year has been very busy for BiH’s anti-terrorist activities, and the wires of the intelligence agencies are very likely buzzing with chatter. Anti-terrorism in BiH hit a new spot in domestic and international media when Bosnian police raided the tiny mountain village of Gornja Maoča in February. They expected the operation to be a major breakthrough, yet the typical items of a small Wahhabi organization were found – a few guns, radical literature, bin Laden videotapes – nothing out of the ordinary for a Wahhabi group. Likewise, some laptop computers were seized, but no pertinent information was found.

The village of Gornja Maoča is described as around 100 full-time residents, with many visitors to the village being observed. After the war of 1992-1995, many mujahideen fighting with the Bosniaks remained in remote villages around the country, including this one in Tuzla Canton. Activity was noticed from time to time, when known Wahhabis were observed visiting the village, and worries were escalated when a checkpoint was installed that forbade entrance to outsiders including the police. The raid took place in a major police action called Operacija Svjetlost (Operation Light), when 600 armed officers stormed the town to “restore constitutional order.”

The legacy of Wahhabis in BiH is that even in spite of strong funding from prominent Saudi and Jordanian citizens, it has not been their most successful movement. Muslims in the country often strongly oppose such conservatism. However, the Wahhabi movement has alarmed many international officials, including European governments and Western intelligence agencies.

Wahhabism in BiH is far from dormant. Now terrorism is once again clearly seen as a real threat by domestic and international police agencies; and it is agreed that the most prescient terrorist threat is from Wahhabi groups. The Bosnian Institute notes that “the potential threat of terrorism in [BiH] is totally linked to the spread of extremist religious ideas in the country.”

The Wahhabi style of Sunni Islam started in Saudi Arabia, and is now the main religion there and in Qatar. Salafi Muslims take their name from the Arabic word salaf, which means “ancestor,” and practice an understandably very conservative form of Islam. Salafis sometimes consider the applied term “Wahhabi” to be demeaning as it represents something even more conservative. Likewise, some Salafi Muslims spread their beliefs missionary-style and are against any forms of terrorism. Those who conform to the idea of Takfiri Salafism – to live a life exclusively as a devout Muslim – have the tendency to become extreme Jihadists.

While the concern of BiH as a target is now gaining prominence, the troubled country has been a transit point for weapons dealers, drugs dealers, as well as human traffickers into Europe. This unfortunate characteristic owes to the porous borders, fragmented police forces, rampant corruption and organized crime in a post-conflict state.

In the past several years, the control of the borders of BiH with Croatia, Serbia and Montenegro improved dramatically, but for a decade after the War the borders were loosely and rarely inspected at the crossings, allowing for the easy transfer of contraband in and out of the country. This is not merely Bosnia and Herzegovina’s problem, but is reminiscent of the extreme corruption in neighboring Croatia, Serbia, and Bulgaria. The separation of BiH police forces along entity lines still represents a challenge for communication between the police forces. Yet the amount of successful drug raids in BiH continue to show levels of control and optimism among police forces.

Haris Čausević, upon arrest, had taken responsibility for the attack in Bugojno, according to the official police report. He later contradicted the reports upon his first appearance in front of the judge presiding over the case.

When terrorists planted and detonated the bomb in the Bugojno police station, their interest was not in merely damaging a municipal building or killing a few police officers. They had much loftier goals in mind. Their aim, as is for many other Jihadists, was to upset public order and induce fear into an exhausted society and reignite conflict.

Regardless of political views, Bosnia and Herzegovina is known as one of the most potentially volatile places in Europe. As such, the response to the threats of domestic terrorism must be comprehensive and swift by all parties involved. If the country appears dangerous and uncontrolled it will complicate efforts to help BiH join NATO and the European Union. While information about planned attacks or illegal activity is hard to intercept, Bosnia and Herzegovina’s law enforcement must prove itself in order to stem fears of dissolution to a dangerous society.

While having this in mind, it is important to stress the US Embassy’s official public statement in the response to the terrorist attack on the police station in Bugojno: “We fully support BiH authorities, who are approaching the investigation of this attack and the fight against terrorism with the utmost professionalism and commitment to public order, protection, and justice.  We have offered to assist them in any way possible”.